Set in 1950s London amidst the gritty and violent world of boxing, this beautiful and brutal debut is the story of one man’s struggle to overcome the mistakes and tragedies of his past.

Jack Munday has been fighting all his life. His early memories are shaped by the thrill of the boxing ring. Since then he has grown numb, scarred by his bullying father and haunted by the tragic fate of his first love.

Now a grafting boxing manager, Jack is hungry for change. So when hope and ambition appear in the form of Frank, a young fighter with a winning prospect, and Georgie, a new girl who can match him step for step, Jack seizes his chance for a better future, determined to win at all costs.

Inspired by the boxing grandfather of the author Emily Bullock, the novel is at once a startlingly poignant exploration of love and family loyalty, and a proud evocation of the strength of relationships formed in a violent, ambitious, male-dominated world.

The Longest Fight was published by Myriad Editions on the 12th February 2015. For more details please click here. An Independent on Sunday Paperback of the Year and shortlisted for the Cross Sports Book Awards - New Writer of the Year.

'Emily Bullock’s debut The Longest Fight, a fine addition to the canon of boxing literature... But Bullock makes a welcome break with tradition in also giving due attention to female characters... (a) grittily impressive first novel.'

'The backdrop of postwar London is splendidly done - all crusted soot and swirling fog - and the boxing scenes have a terrific vigour and excitement.'

'Captivating in its beautiful portrayal of grief and love... Page by page, Jack and his life become all the more real, until he fills the reader’s imagination and the novel can’t be put down. Brilliantly written, genuinely engaging: a great read.'

'In her story about redemption and hope, Bullock’s writing is as taut as the fighters in her ring.'

'I could feel every bruise and sprain.'

'I was knocked out by the depth of the emotional punches in this stunning début novel. Emily Bullock had me on the ropes, wrung out, cried out and then delivered a heart-wrenching blow in the final, pitch perfect, not a word wasted, lines of the last chapter.'

'The realism jumps up and bites the reader at every turn of the page – simple descriptions of everyday London streets are brought to life in a way that makes you wonder if you’re reading the prototype for a 3D book.'

'This is a skilfully written and intelligent novel with multiple layers. For its vivid portrayal of another world, and its recounting of a story to break your heart, I highly recommend it.'

Fiction is Stranger than Fact

'With her debut novel Emily Bullock shares something special – a clear understanding of her subject matter, and a talent for developing her characters in a way that leaves you craving more.'

'The real meat... is in the depiction of pre-war and 1950s London: Peckham and Soho in all their smoggy glory. We got lost in this world of backstreet boozers, sweat-reeking boxing clubs, trams and the struggle to make good (the real ‘longest fight’). Highly recommended.'

'The novel really took me on a rollercoaster ride of emotions and I really enjoyed it. Bullock’s characterisation is sublime and each character is wonderfully individual. The setting of the seedy and dark side of London added real grit to it.'

'The Longest Fight is a strong debut... The tension is sustained to the end, and the writing never lapses into sentimentality.' 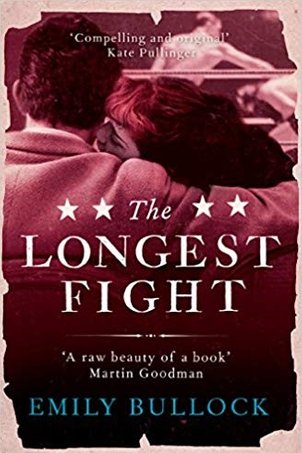